You are here: Home1 / PHOTOS

Apart from guiding, I am passionate about bird and wildlife photography. I will be showcasing some of my snaps over the years. I have grown from taking pictures with small cameras like Lumix through f 4.0 300mm fixed canon and now F 2.8 ,300 fixed lens . With experience spanning over 5 years, I can coach armature photographers in my trips and many have been very appreciative as you know photography isn’t easy and takes time.The pictures here were all shot by myself. I have donated around 7 photos to an up coming photographic book ” BIRDS OF EAST AFRICA” BY KENNEDY SCOTT.

My pictures are also for sale personal uses, so you can contact me anytime  for a discussion on that matter. 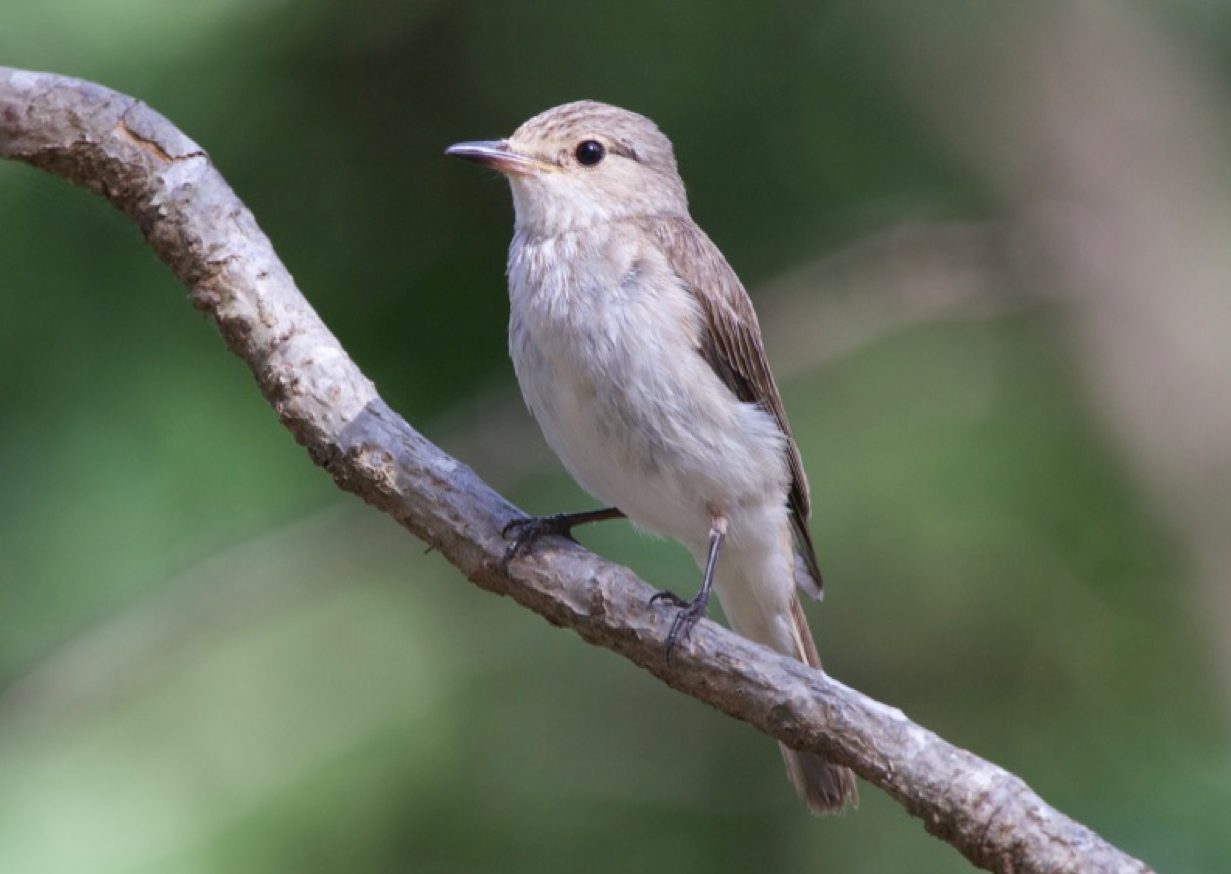 GAMBAGA FLYCATCHER: Photographed in late 2021 in Tsavo East, this bird has been elusive in terms of records, some years ago, I snapped it in the foot of Sagala hills and the guest I was with submitted it to E-bird and was later argued by the committee but accepted upon my submission of the picture. That was the first record in that area. It has now been recorded multiply especially in Lake Baringo and Kerio valley area. 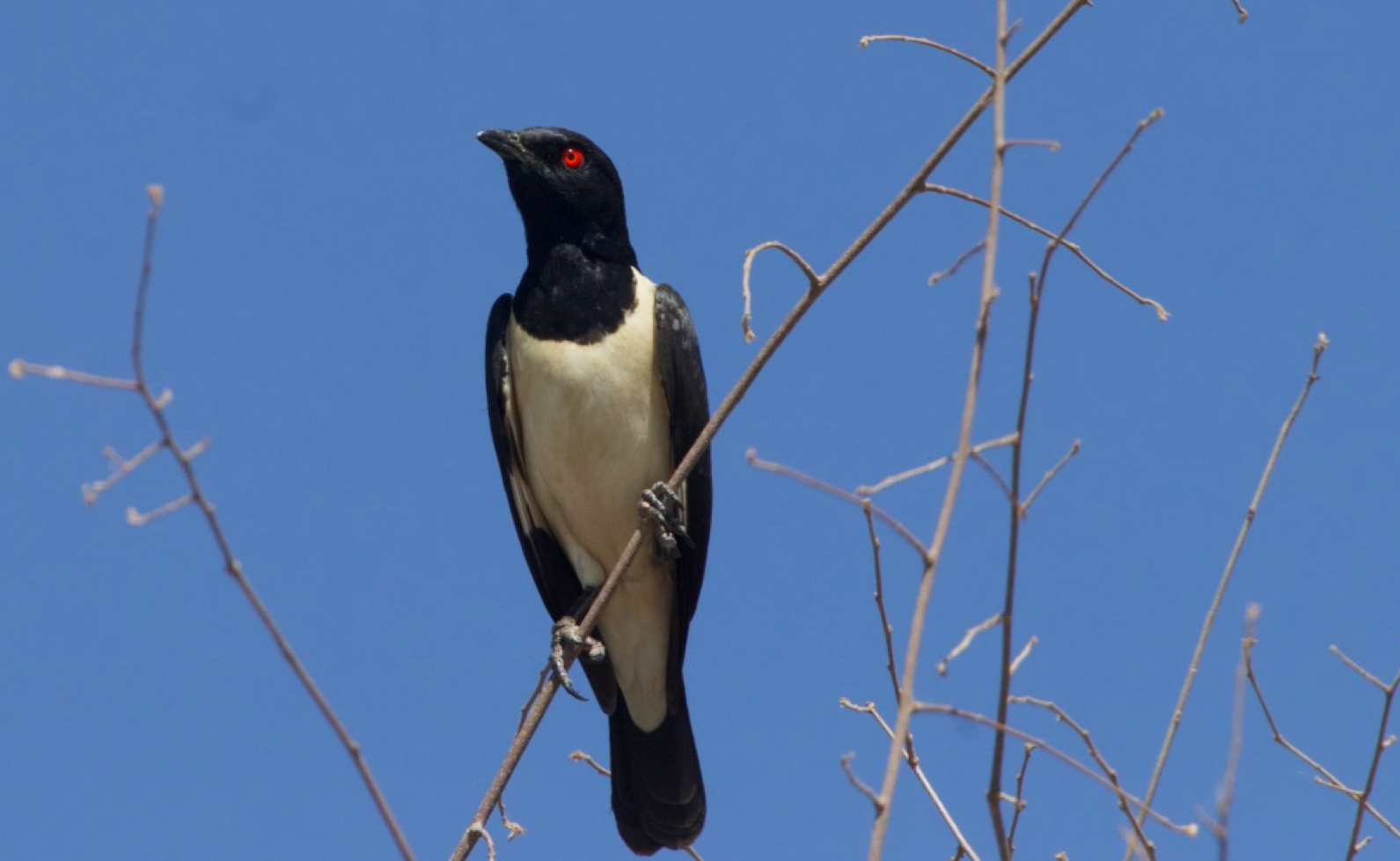 MAGPIE STARLING: A magnificent black and white  starling with distinctive bright red eyes and inhabitant of dry woodland country,like Baringo, Samburu, Tsavo East, Meru and much of Northern Kenya. large feeding flocks are observed during ripening of wild fruits like Diospyros Scabra tree, Azadiracta indicus(Neem). Very shy and getting to photograph it not easy. Photographically, it is also hard given the contrasting colours and too much light in its area of residence. This was taken in Lake Baringo in the morning hours thus given a near perfect capture. 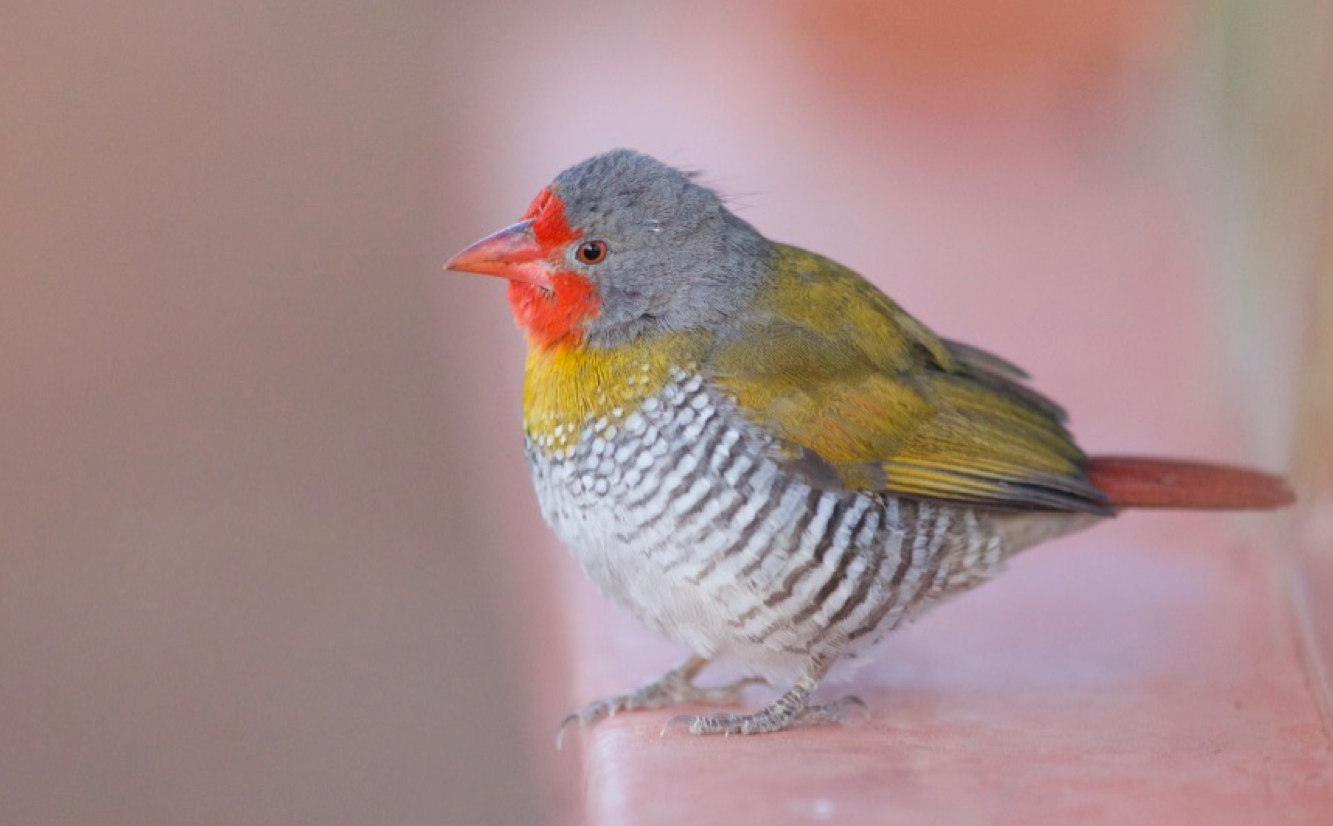 GREEN-WINGED PYTILIA: One of the beautiful finches that is associated with dry bushes with grassy undergrowth, with round grass-weaved nests installed very low on scrubs underneath fairly taller bushes.  It is a seed eater as well as a left-over forager in homesteads tucked in bushy compounds in arid and semi arid areas. It is a common species in lower Baringo area, Tsavo, Samburu, Meru and more other places, this was taken particularly in Lake Baringo in my compound 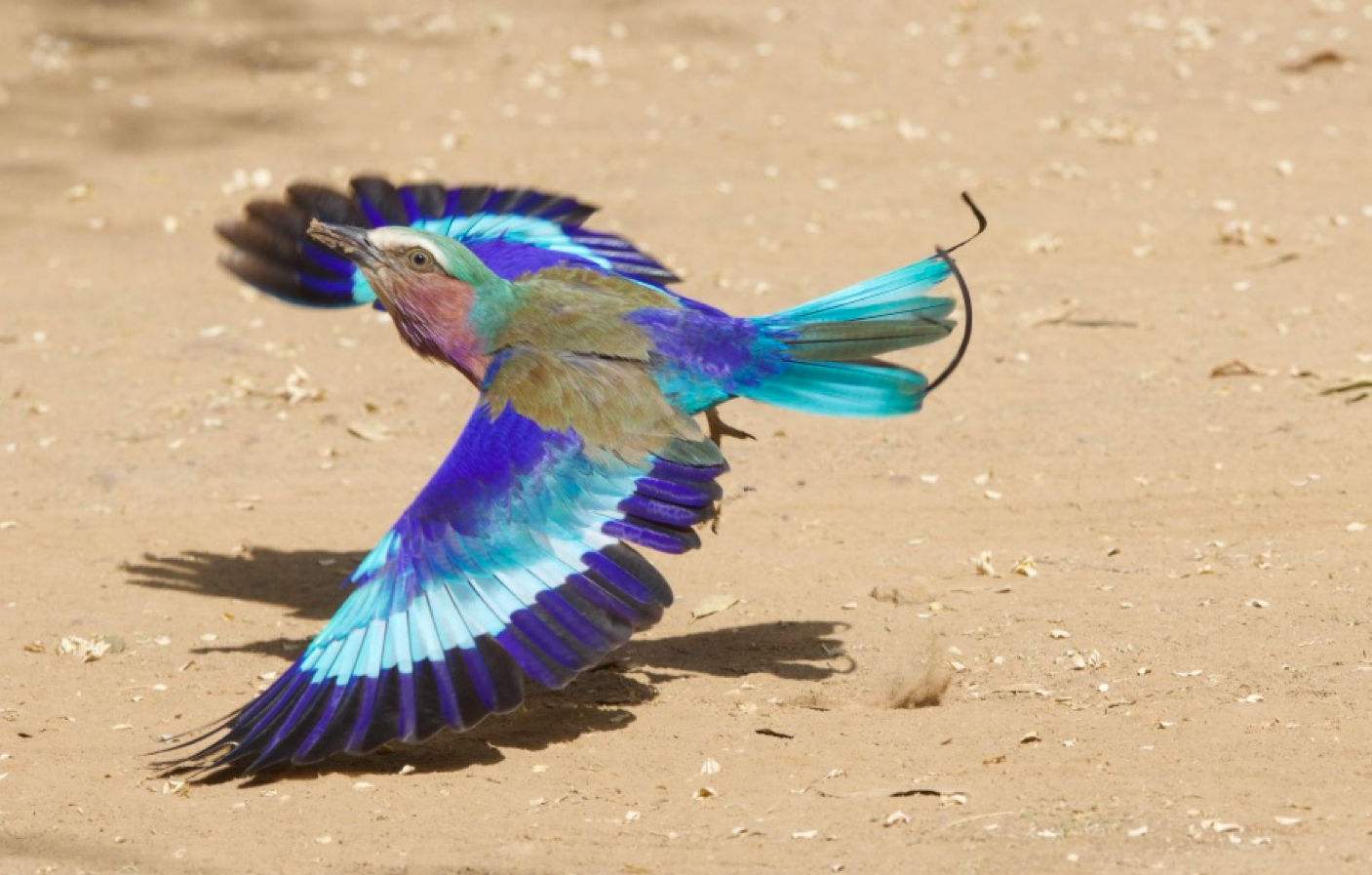 LILAC-BREASTED ROLLER: Beautiful and the Kenyan national bird, it is dive-flight to a perch is characterized by a rolling act which seem to be a territorial display or could also be a form of female-attraction ritual. This photo was taken on a raised surface while the bird was foraging on the ground. Flight shots are difficult especially if you are using slower cameras. 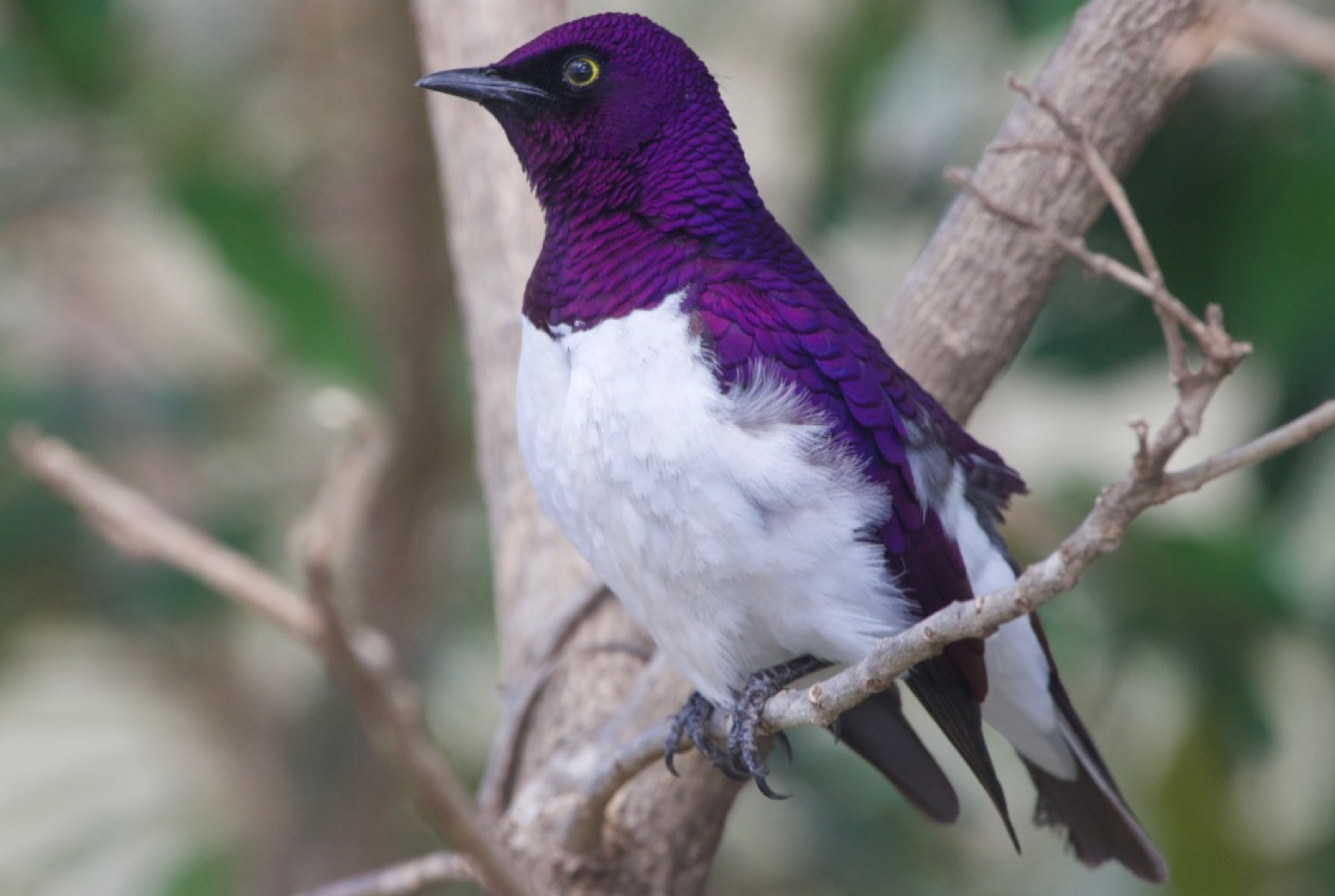 VIOLET BACKED STARLING: No doubt an attractive starling with highly iridescent plumage,varying greatly from purple,blue to nearly reddish depending on the light intensity.It is an inhabitant of bushes by streams and a moderate elevation of around 1200m and above. Associating with figs and other fruiting trees. This was capture in Masai Mara game reserve in 2021 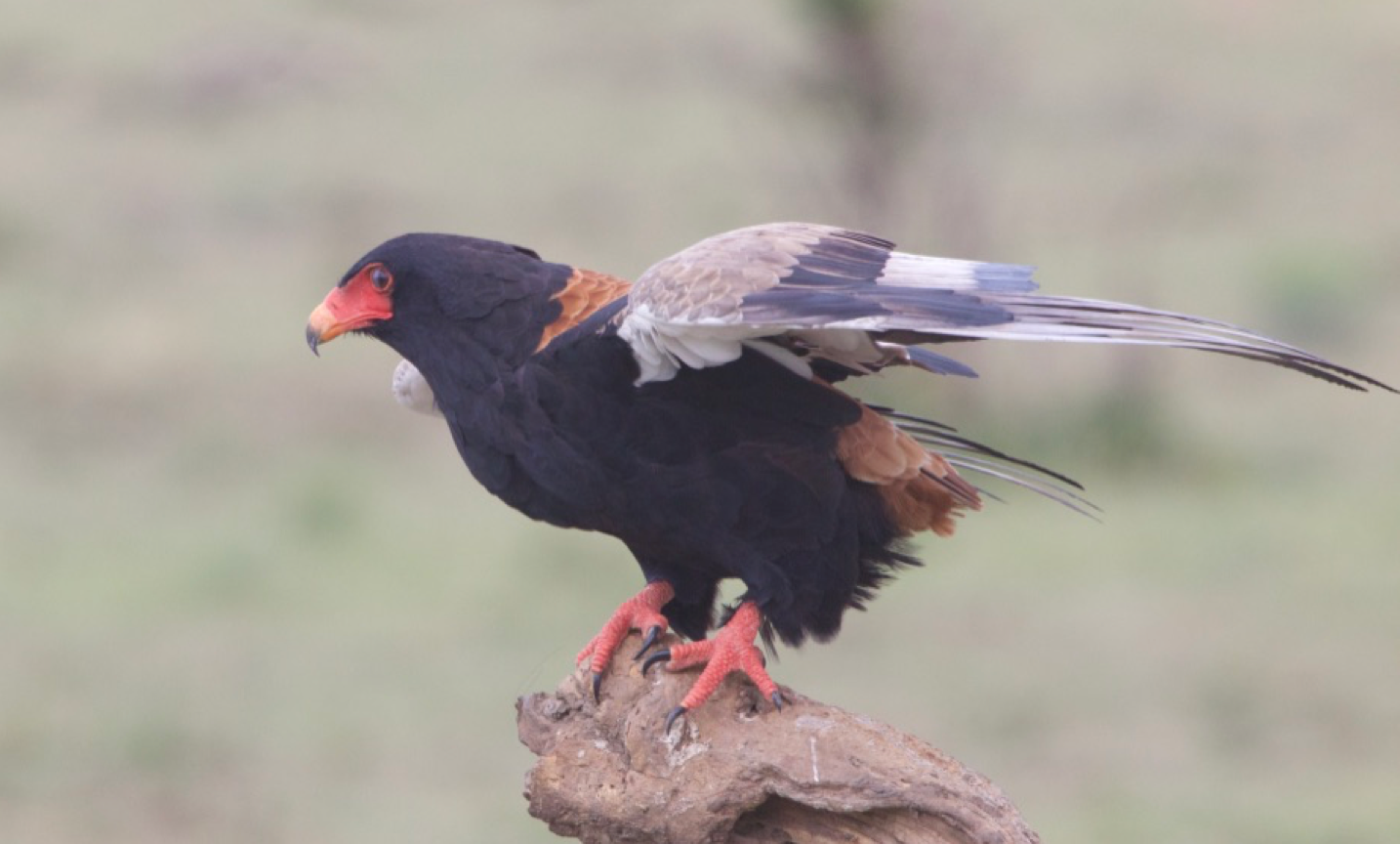 BATELEUR: The outstanding eagle whose French name suggests a tight-rope walker due to its flying style. Very short tail, red feet and  red bare skin around its face, it cannot be confused with anything else. Very present along rivers with tall trees within open scrubby and grasslands. Masai mara, Samburu, Amboseli and Tsavo is apt for its sighting.  Mingling with other raptors in kills. This picture was taken in the late morning amid light drizzles hence the grainy nature of the photo. 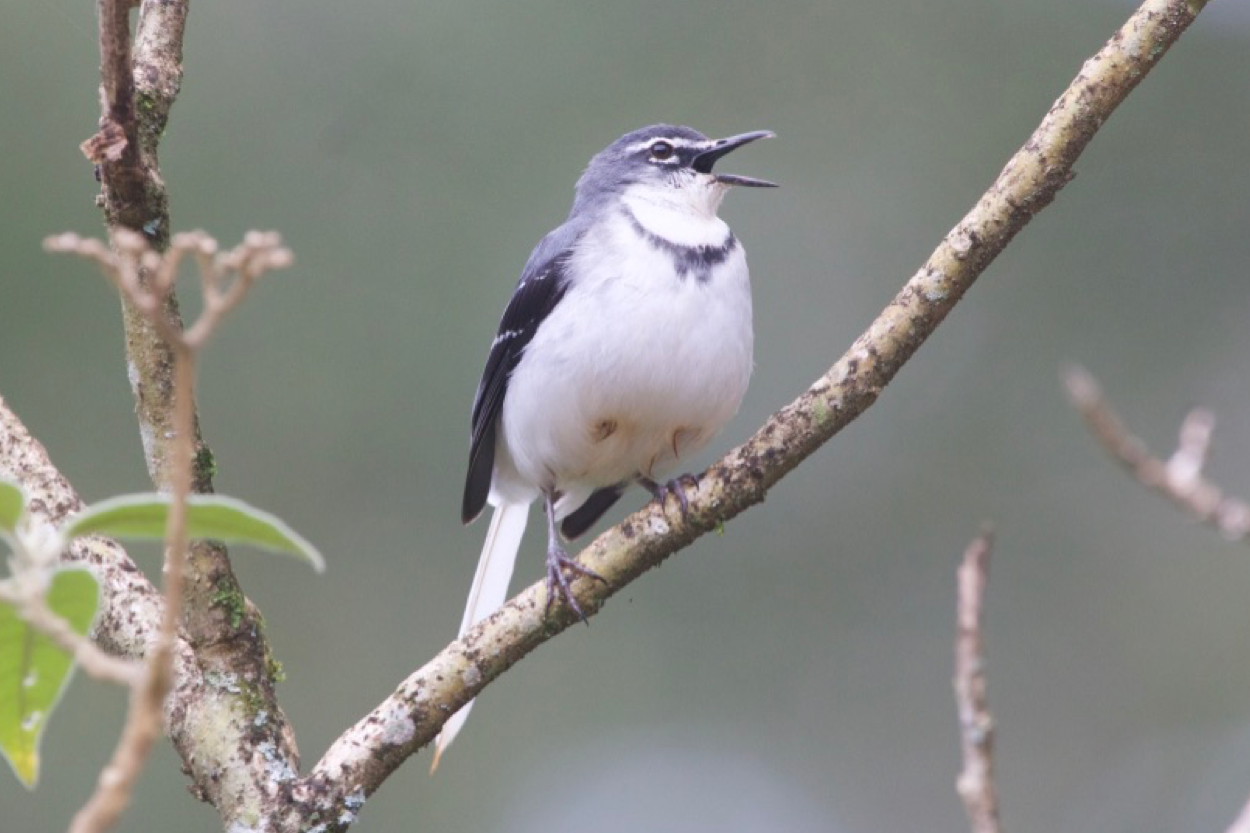 MOUNTAIN WAGTAIL: A very neat wagtail despite spending much of its time around muddy pools and streams in the forest. It constantly wags its tail as the name suggests, most of the time foraging on the ground around rocks making it difficult to get nice pictures couple with its shyness. Long and zoom lens become more rewarding in such occasion. This was taken in Kakamega forest in 2021 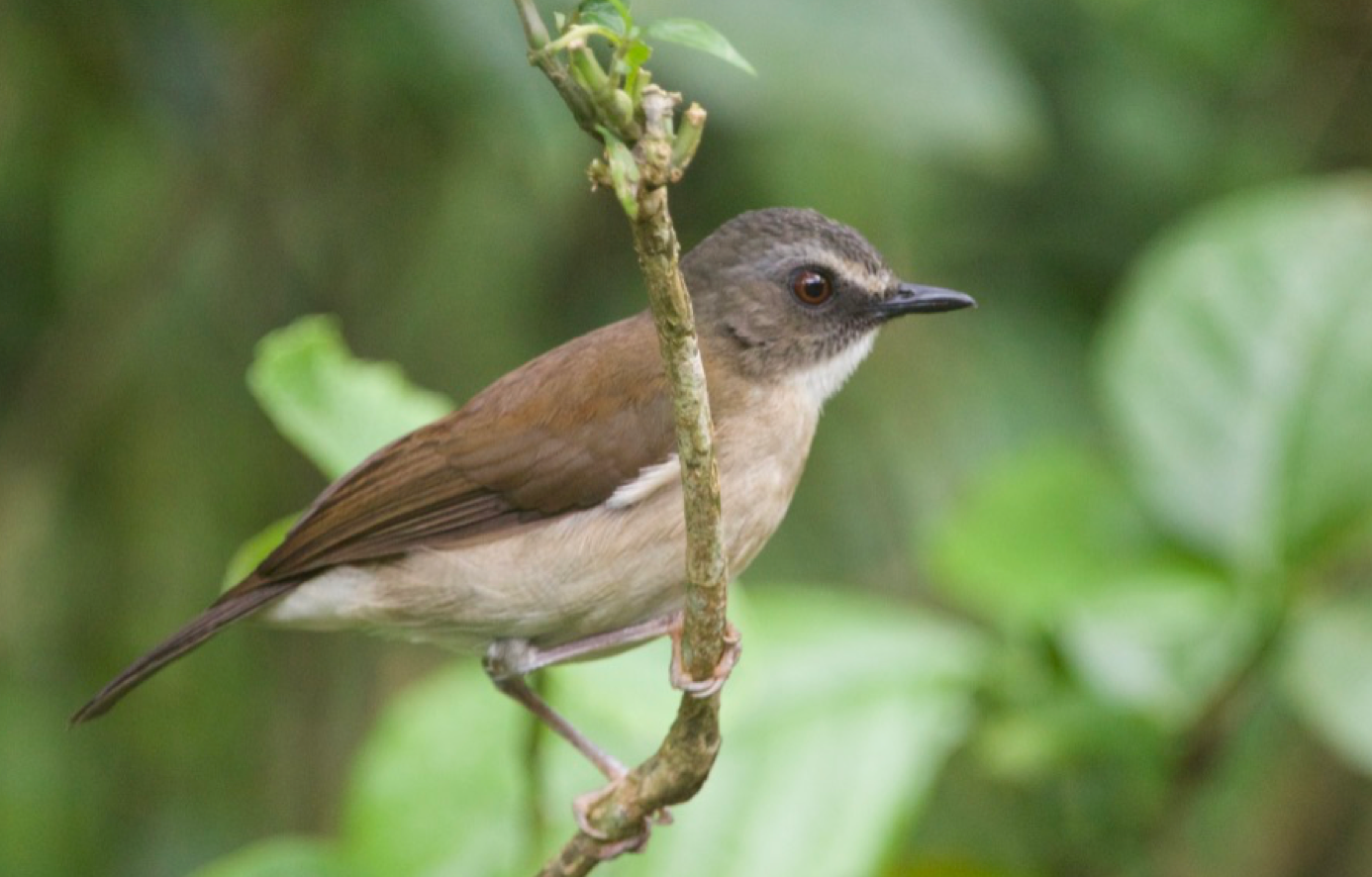 BROWN-CHESTED ALETHE: A medium sized bird of equatorial rain-forest , frequenting deep forest trails, ground forager . Sitting or standing still in trails where ants crisscross will lure this bird in and although shy your patience will yield good result at the end. Taken in Kakamega forest around Ikuywa.

NORTHERN PUFFBACK: Male and female taken on the same day at Kerio River Lodge in Kerio Valley, a shrike sort of a bird that feeds on caterpillars and other insects. 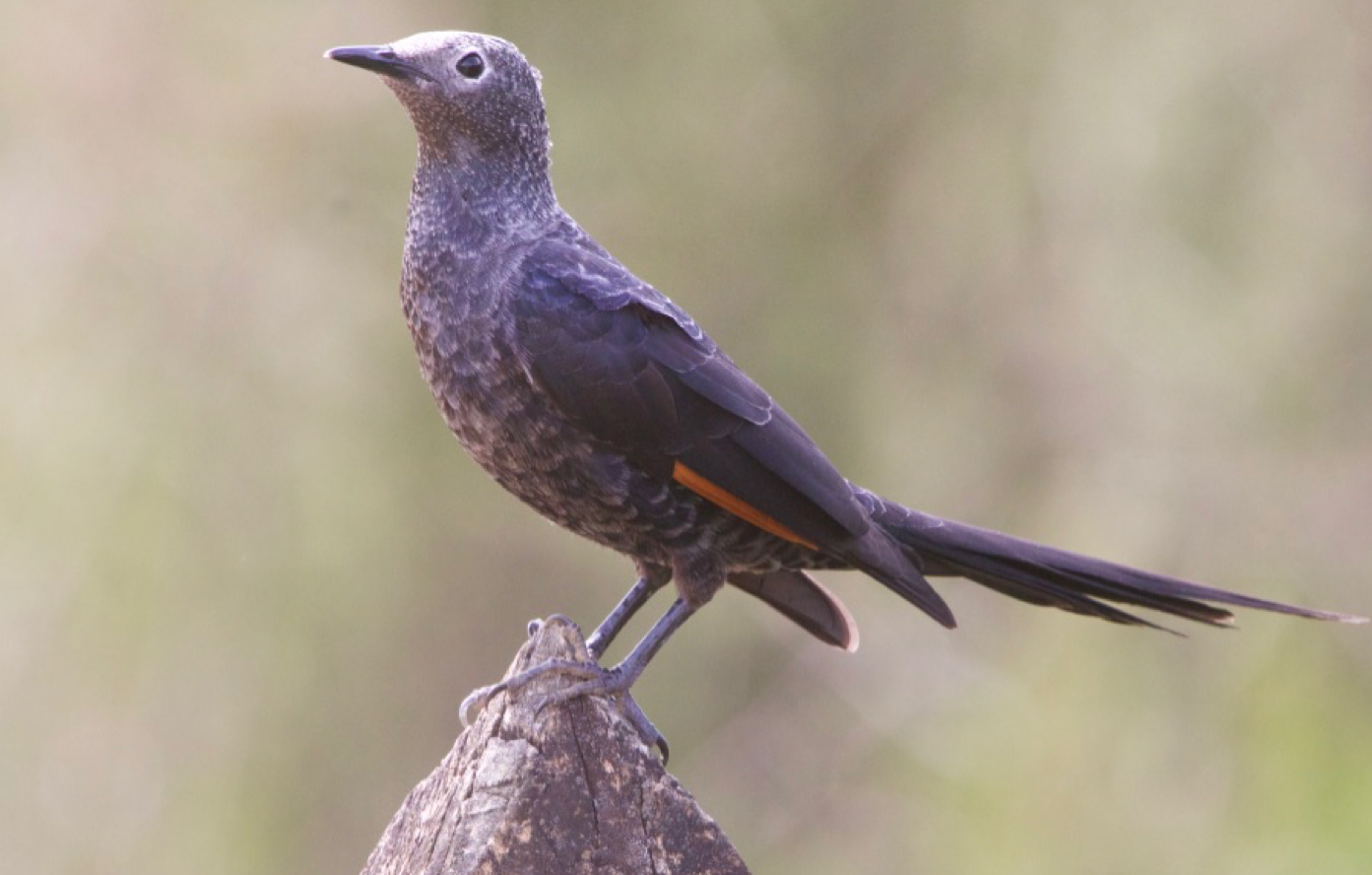 SLENDER BILLED STARLING(female): Note the graduated tail and slimmer body compared to the Red-winged starling which is more common. This bird associates with montane forest and particularly in water falls where they perching on the rock wall behind the falling water. Taken in Aberdares National park at the Chania falls. 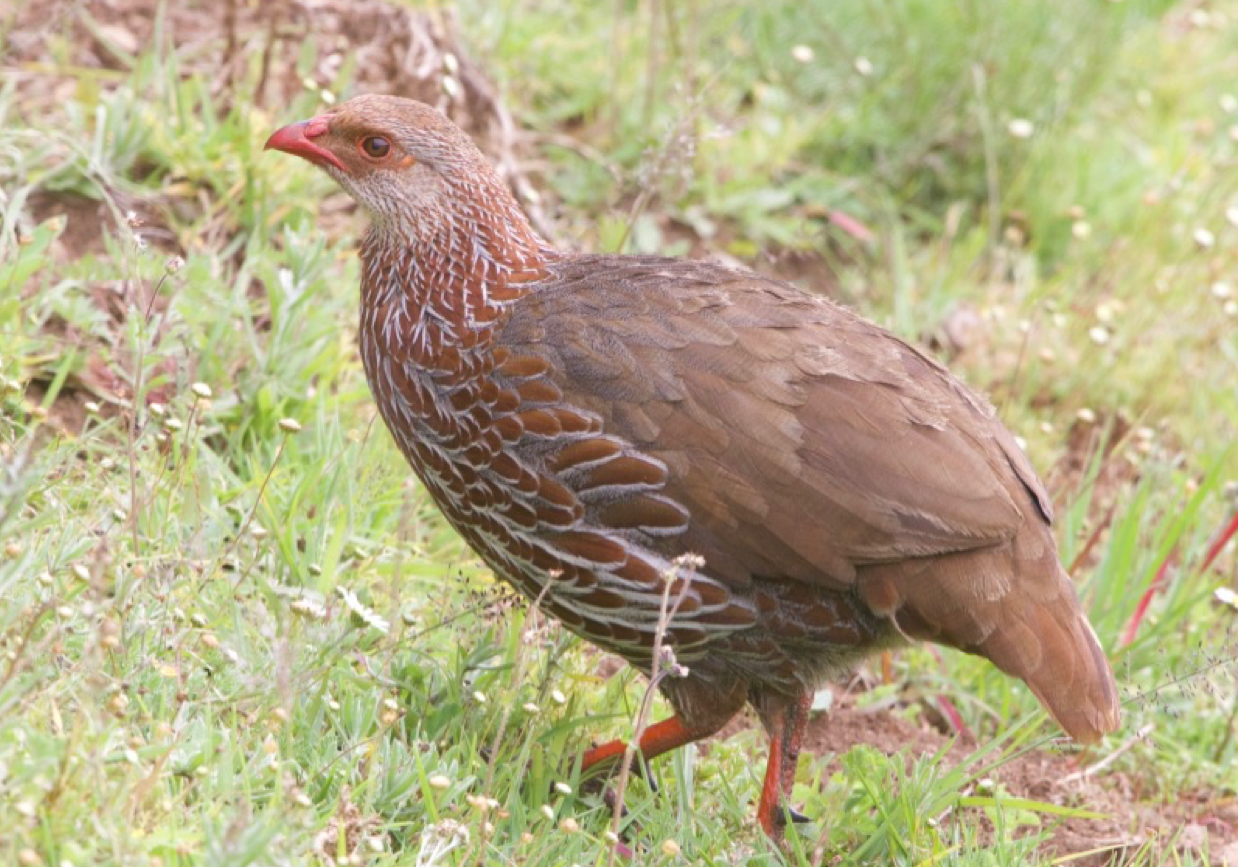 JACKSON’S SPUR-FOWL: A gorgeous looking huge francolin of the  bamboo forest and the moorland,all you need is to get to its habitat, they are docile if approached appropriately.The only hindrance is the lighting that may not be suitable for pictures much of the time due to clouding and fog some other times but of you have enough time all will be good in the long run. Taken in Aberdare national park in 2021 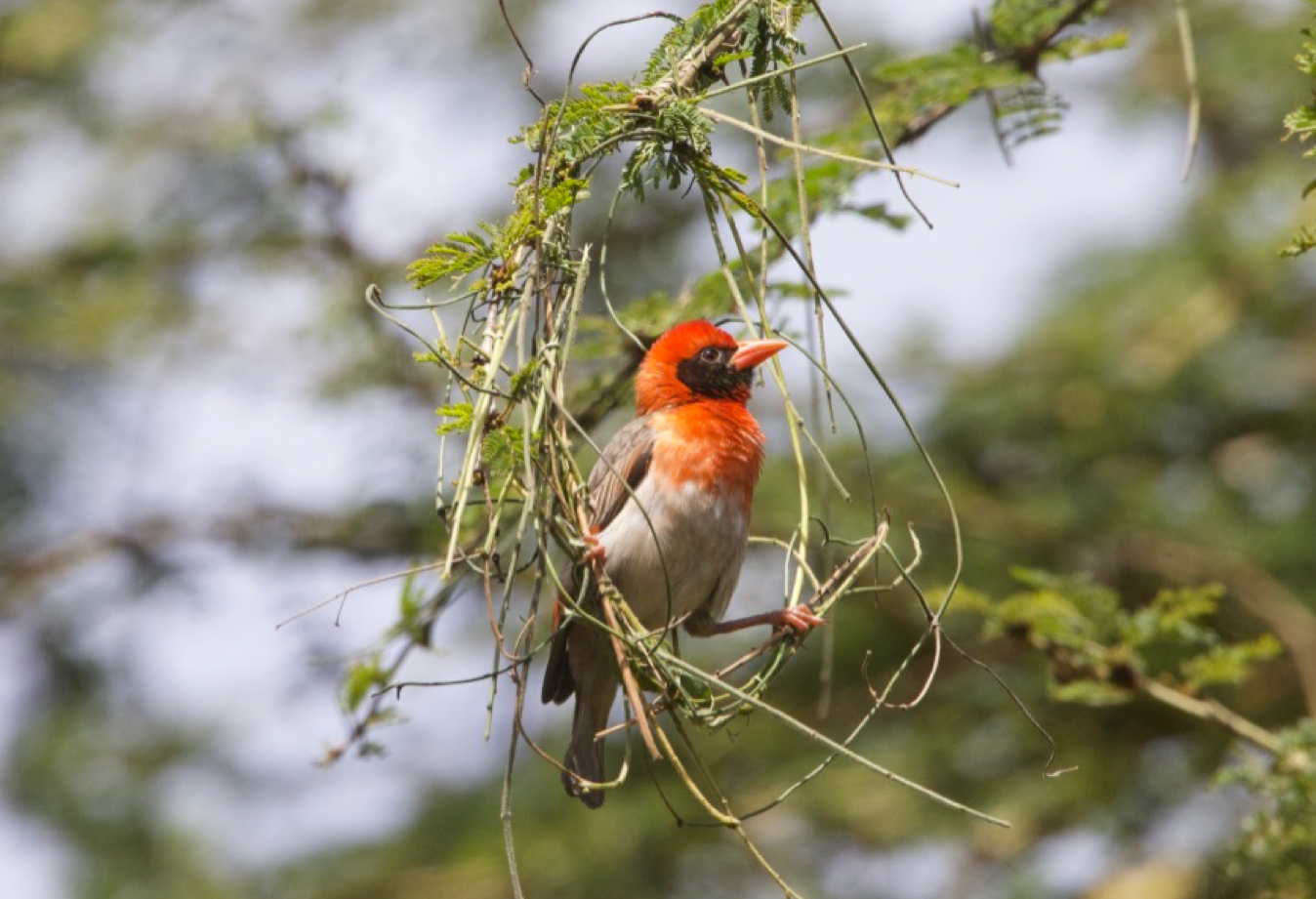 RED HEADED WEAVER: Indeed one of the beautiful weavers, strikingly red headed and a black mask and as the name suggests it weaves its nest with grass. Taken at Treetops entry gate to Aberdare national park. 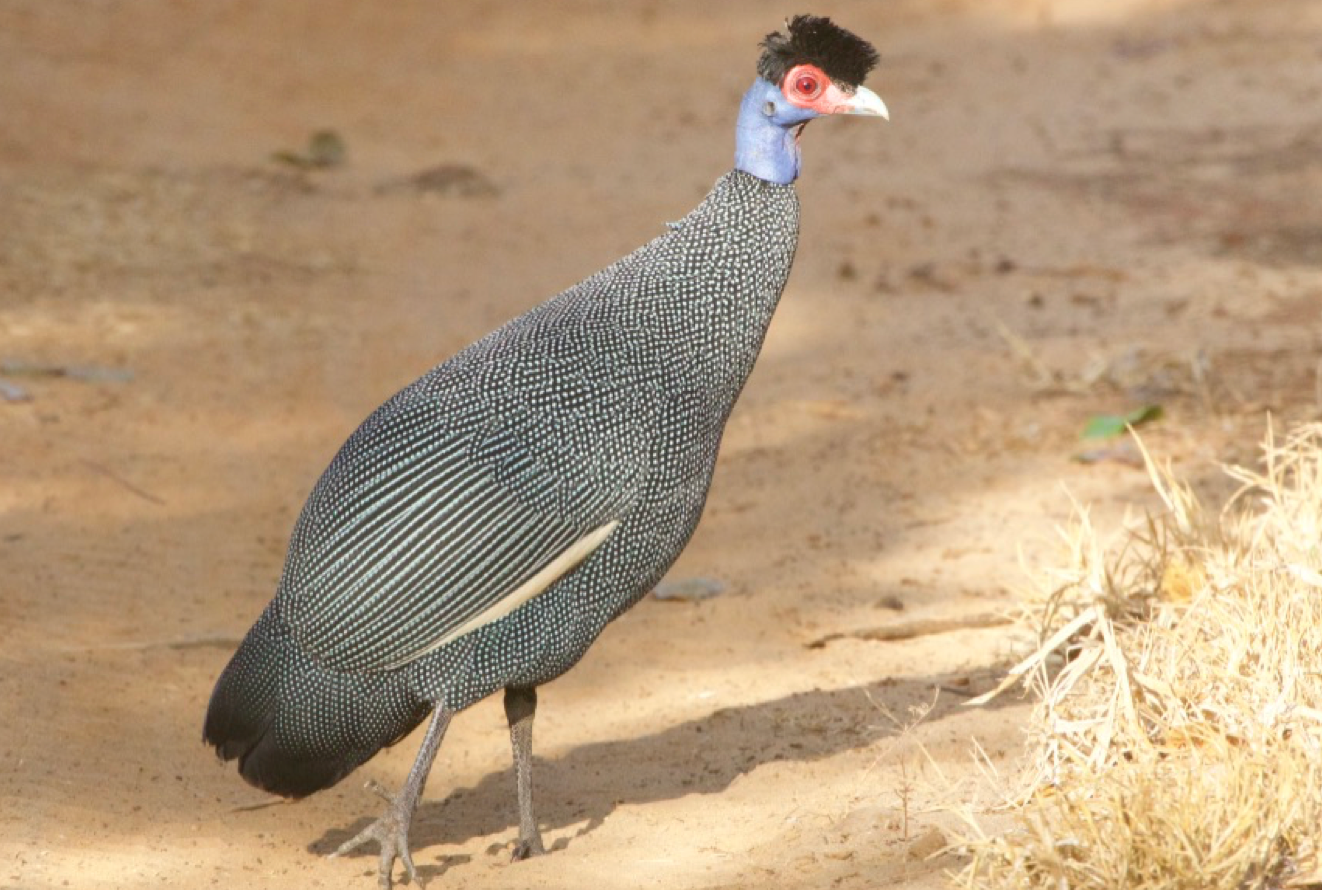 CRESTED GUINEA-FOWL: A forest dweller, shy and secretive . I have a feeling that population inWestern Kenya (kakamega forest and Elgon) may be diminishing as I have only seen them once in Kakamega and never again. There may be snaring given the fact that villagers stream into the frorest for firewood and herbs. This picture was taken in Arabuko/Sokoke, I have also once seen them in Shimba hills national park where I have fewer times that the North-coast forest. 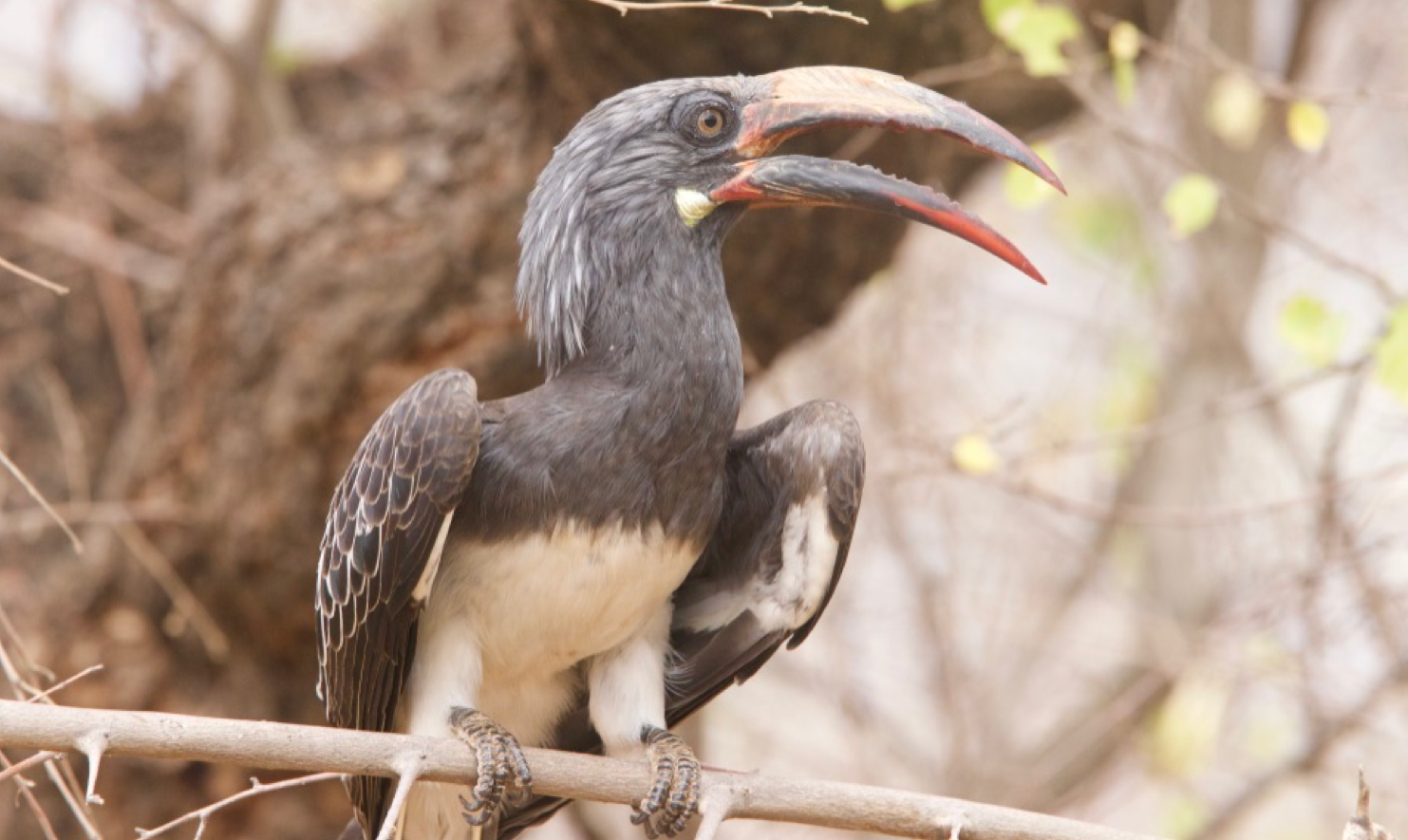 HEMPRICH’S HORNBILL: Fairly larger hornbill, very similar to Crowned hornbill but lacking the bright orange bill and occupying dryer habita composed of acacias  other lowland species,residing majorly on cliffs, it does wander to homesteads for skinks, lizards on walls and left overs as seen in Lake Baringo. 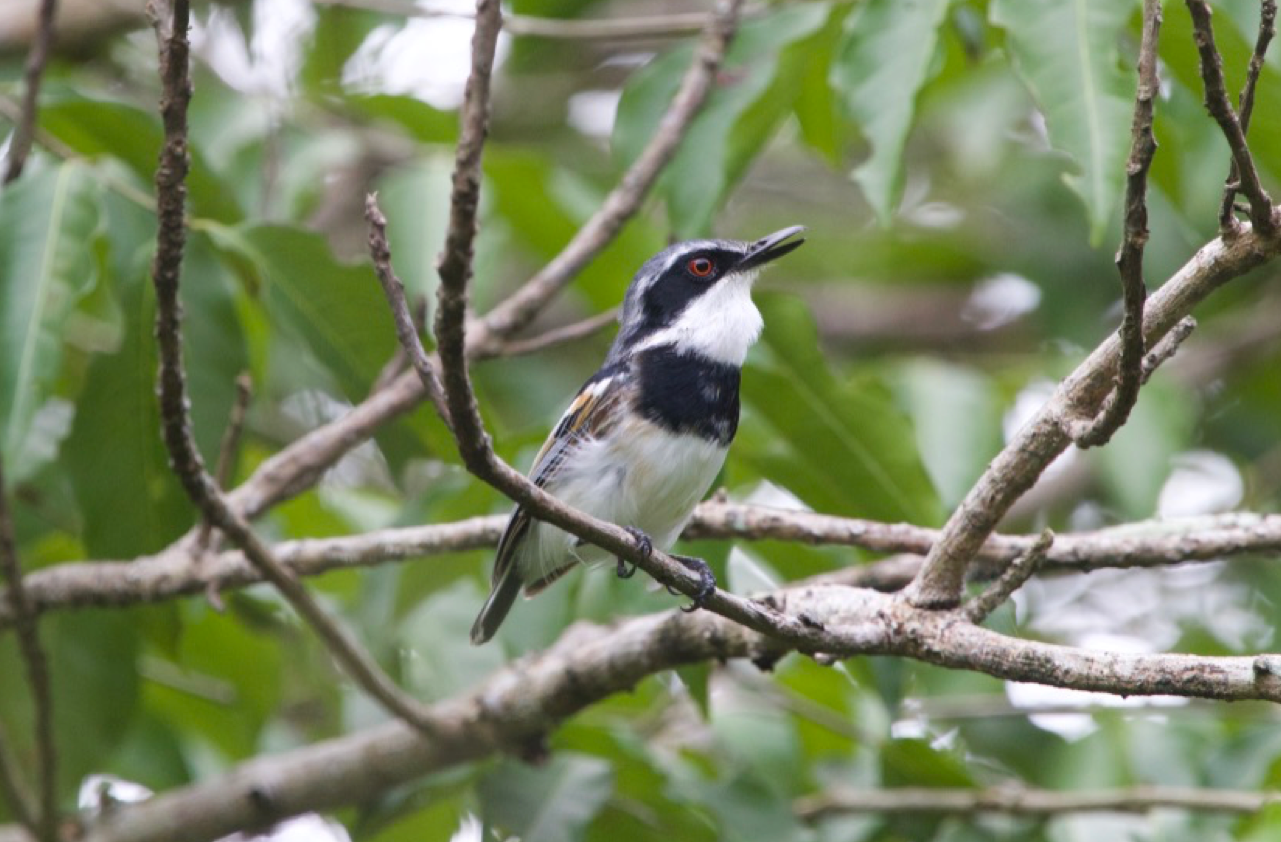 FOREST BATIS: A coastal species residing in mixed forest section of Arabuko/Sokoke and other remnants,foraging in lower section unlike the East coast batis which dwells mostly in the taller Brachystegia trees, although occasionally seen quite low in the thicket. Taken in Arabuko/sokoke forest.

EAST COAST BATIS (Male and Female): What was initially called pale batis. Resident of Brachystegia trees in the Kenyan coast and a difficult bird to click as due to its size and high mobility, every time behind a twig or a leaf. This was a rare shot I could not imagine of, the birds were resting with little movement below eye-level in the late morning as I creeped through the thicket following Sokoke pipit call, as I started aiming the camera on this duo, the pipit rose from the ground in front of me but saw where it landed. I caught up  with the pipit later after getting these near-perfect photos. Taken in Arabuko/Sokoke forest in 2021 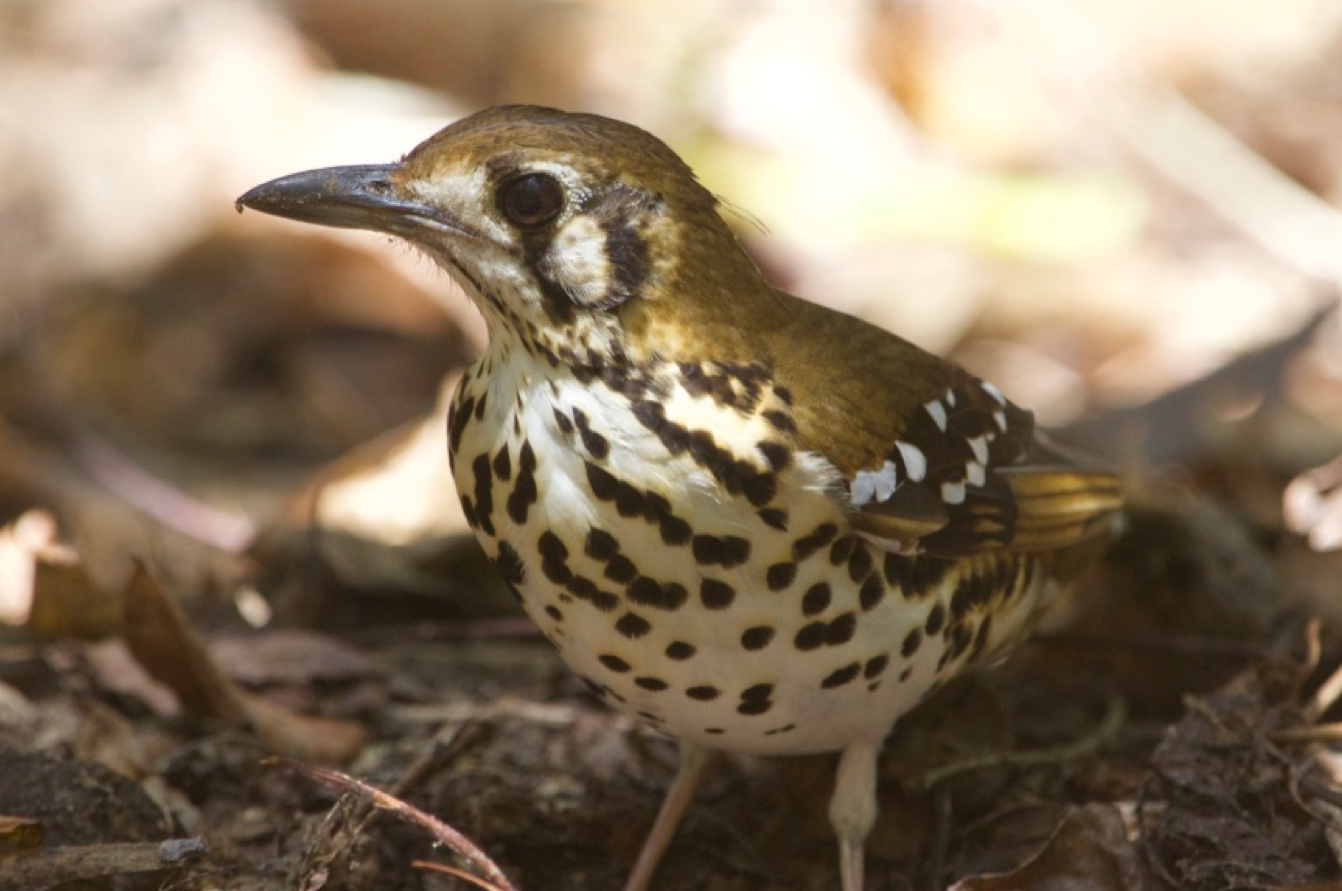 SPOTTED GROUND THRUSH:A rare visitor to the coast (March to October), a bird I have seen few times. Even when around it is really hard to see as it blends so well with its surrounding.Feeding in the undergrowth where dead browning leaves provide a perfect camouflage unless it turns to expose the spotted whitish breast. Your calmness and patience can draw this bird to your feet. Taken in Arabuko/Sokoke forest, other possible sites include the Gede ruins. 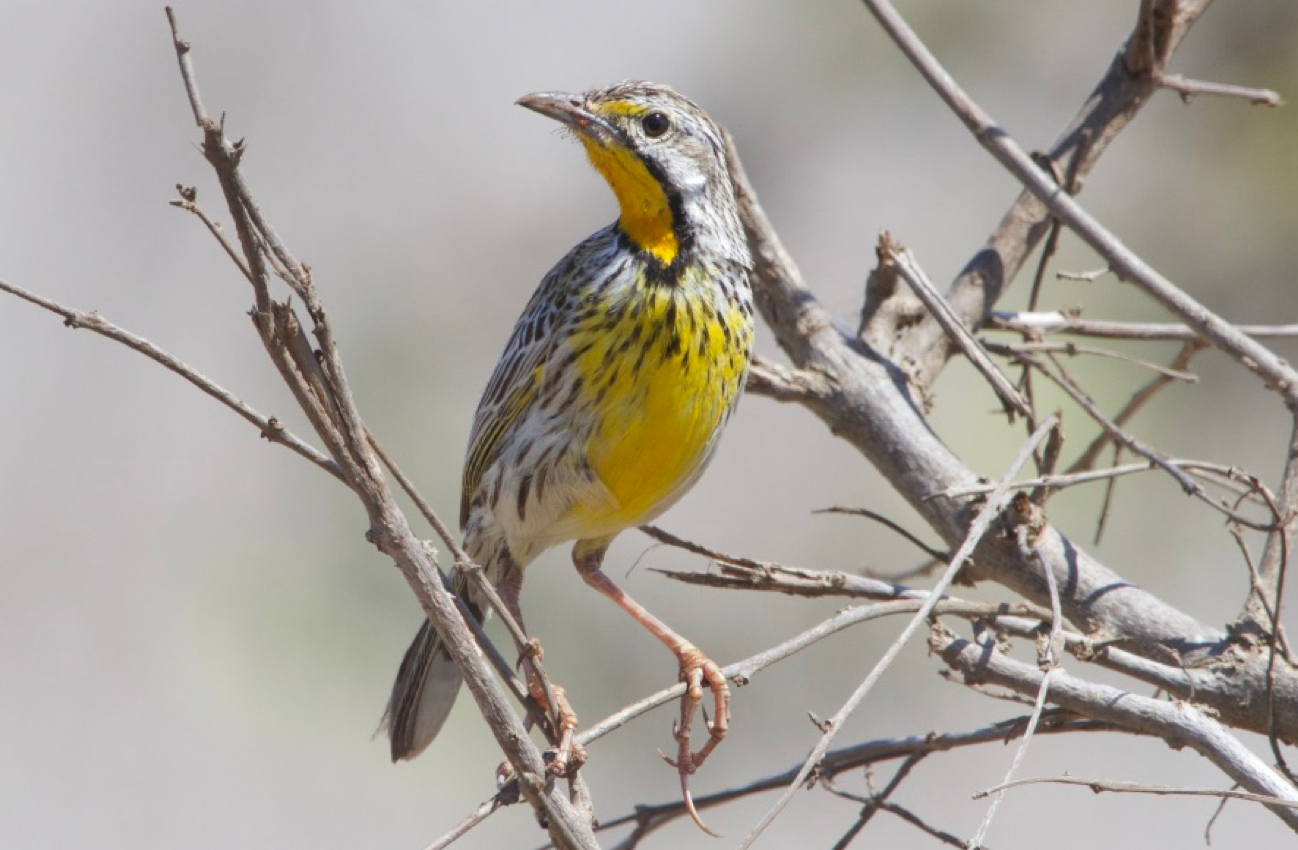 PANGANI LONGCLAW: Very much like the widespread Yellow throated longclaw but the throat does vary from yellow to orange though the breast and belly is yellow, the vital field mark is the black stripes extending down the flanks. Taken in Tsavo East national park. 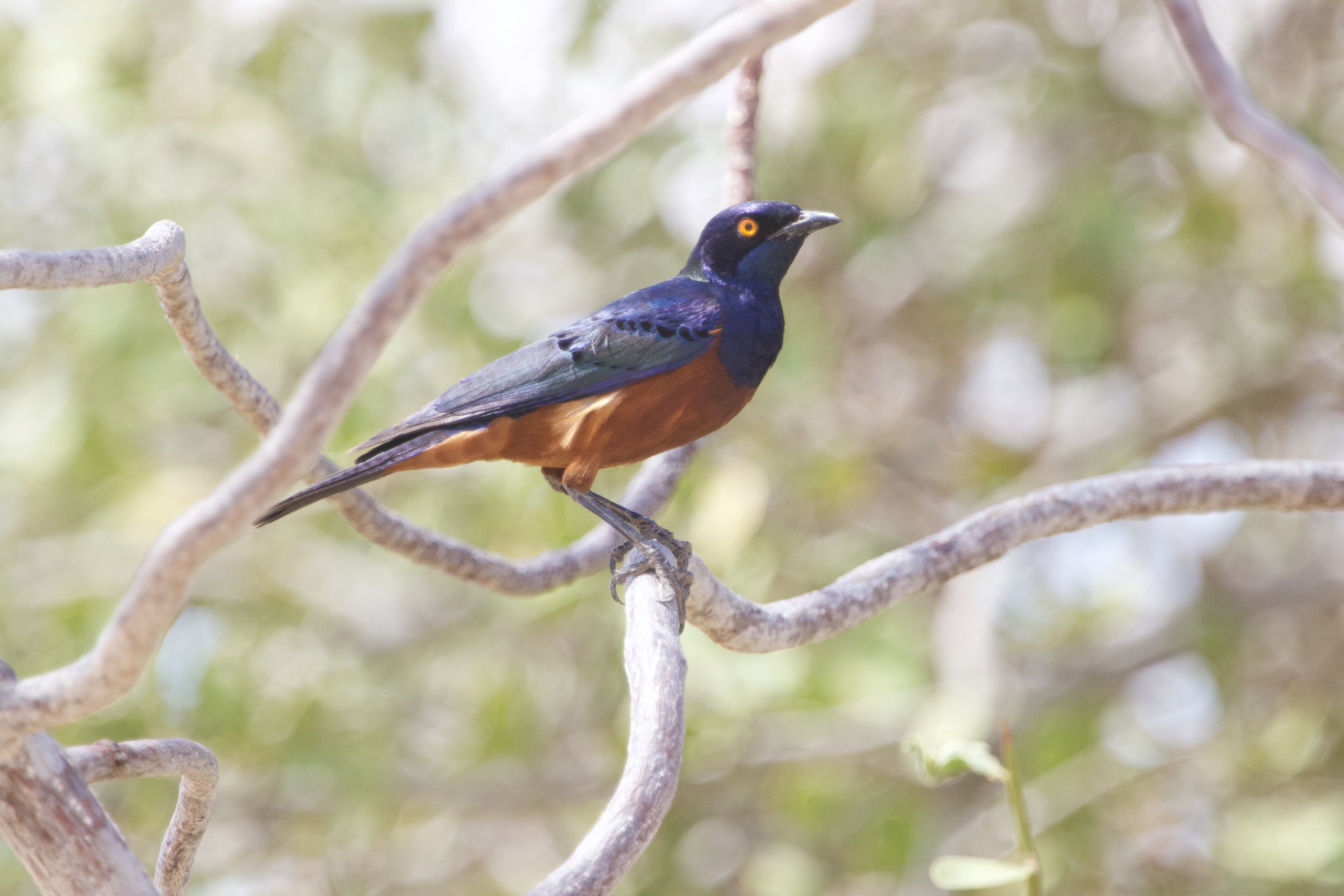 SHELLEY’S STARLING: This is one of the hard-to-see starlings, very similar to Hilderbrandt’s starling except for the richer plumage and orange eyes as opposed to red, found in very dry North and South eastern regions. This was taken around Sala gate of in Tsavo East. 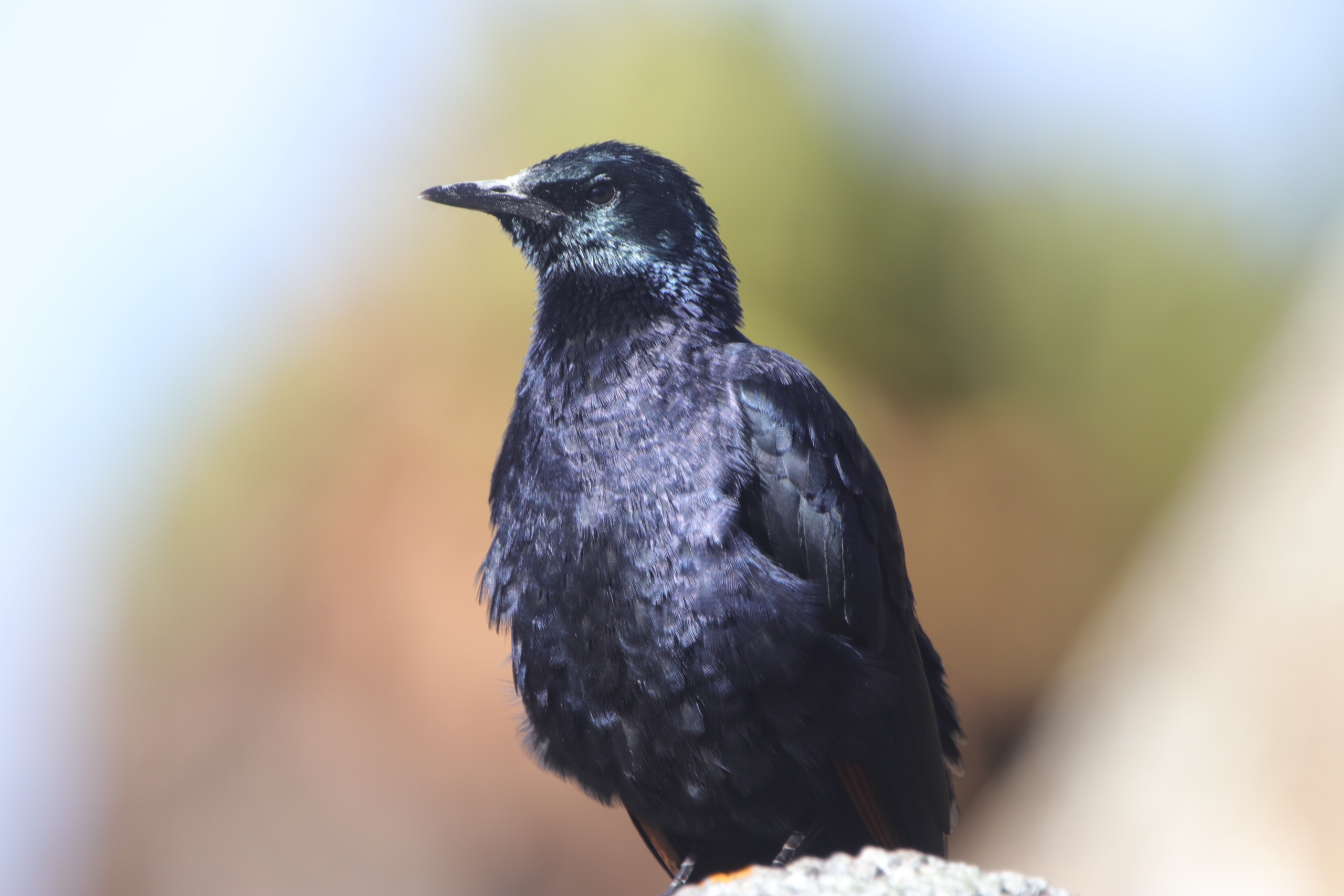 SLENDER-BILLED STARLING: Very much similar to Red-winged starling but slender built,slender bill and found in moist habitats where it associates with waterfalls. This was taken in Mackinder’s valley in Mt Kenya on 17th Nov 2022 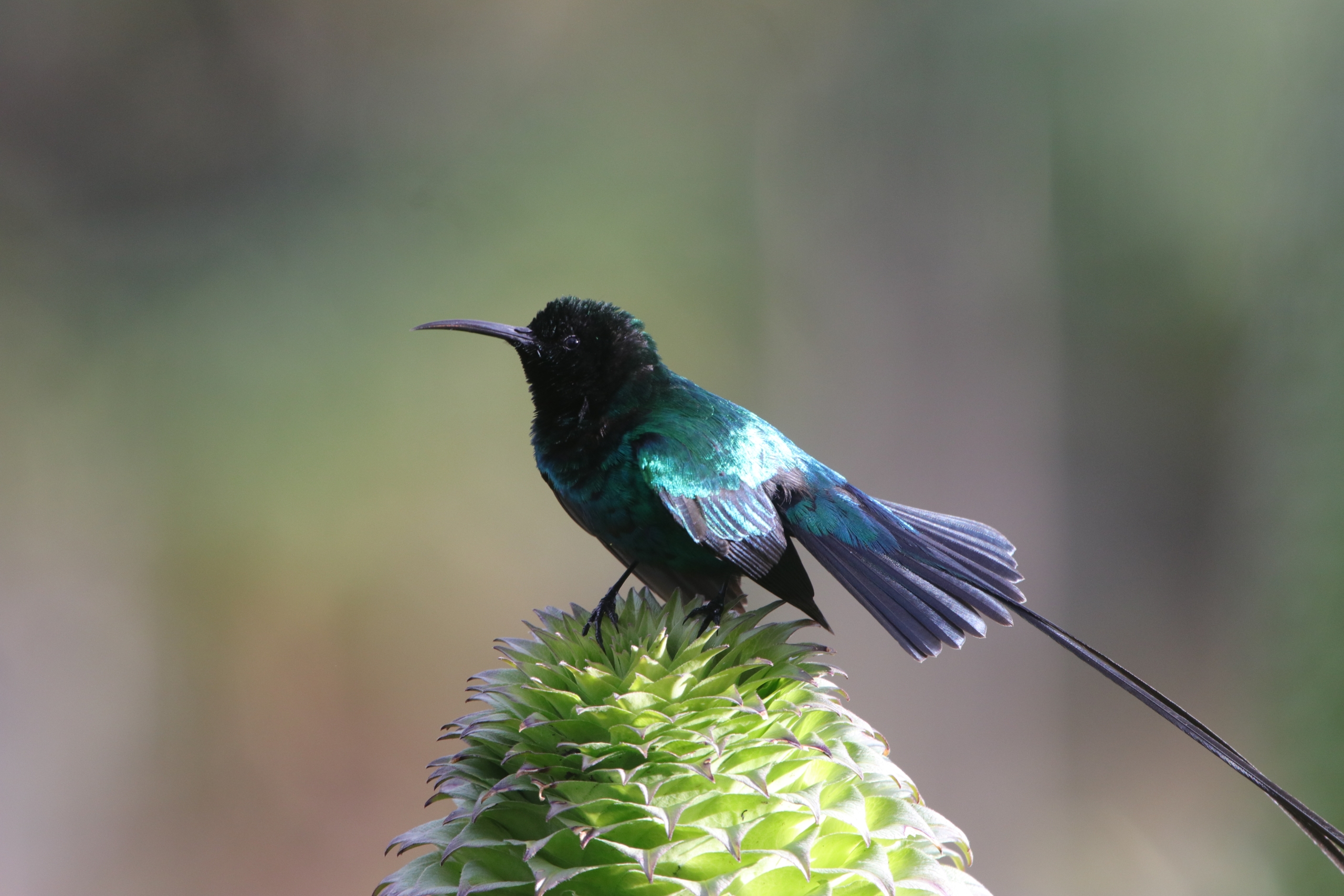 SCARLET-TUFTED MALACHITE SUNBIRD: High altitude species, found in the moorladn in Mt Kenya and Aberdares above 3500M above sea level. Foraging from Giant Lobellias, the scarlet tuft is not always visible and one may take it for Malachite sunbird without keen observation.